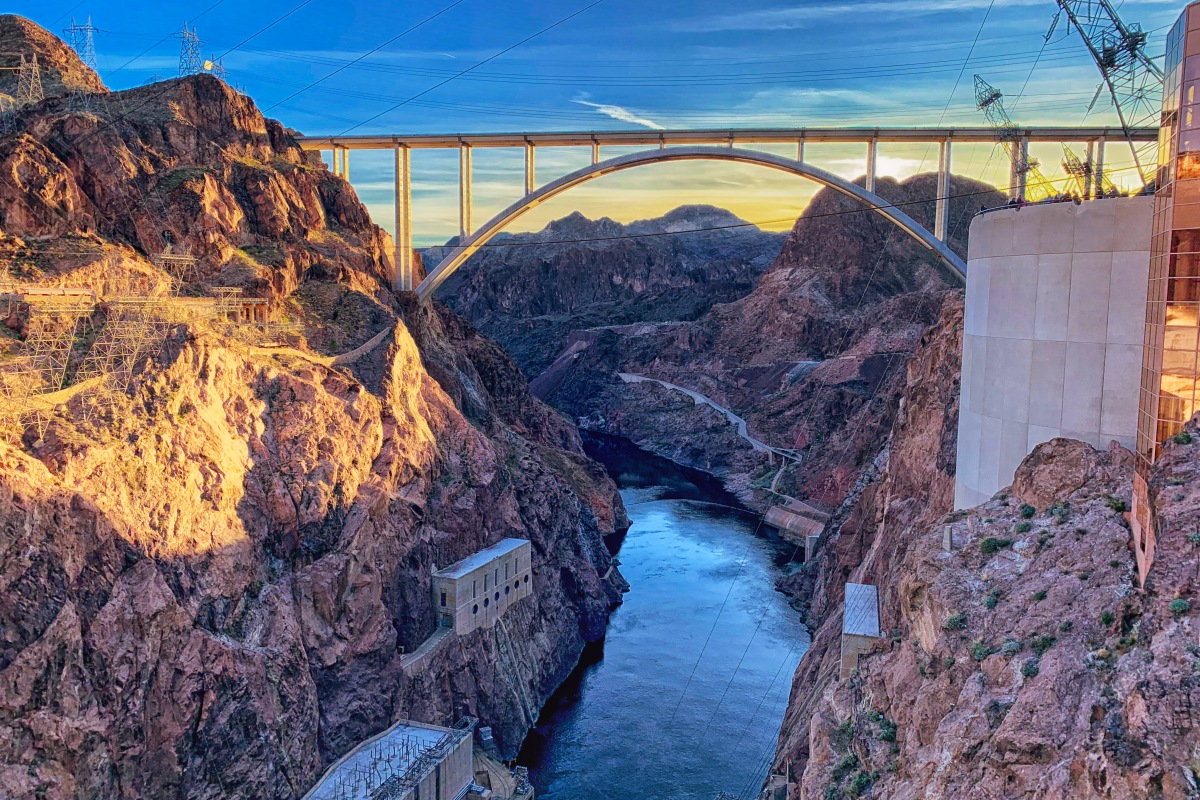 The Hoover Dam is located on the Nevada – Arizona border about 30 miles southeast of Las Vegas. Completed in 1935, it harnesses enough water from the Colorado river to irrigate 2 million acres of farm land, provides municipal water for urban centers including Los Angeles, Phoenix, Tucson, and Las Vegas. It also contributes enough hydroelectric power to serve 1.3 million people each year. With 7 million visitors a year, the Hoover Dam is the most-visited dam in the world.

The nearby town of Boulder City was created specifically for workers on the Hoover Dam project. The city is still thriving today. Las Vegas had a population of ~ 5,000 people in 1931. Today, Las Vegas has ~ 2,700,000 residents.

If you are visiting Las Vegas, a Hoover Dam excursion is a relatively short trip and definitely worth the visit. If you are planning to visit the Grand Canyon during your trip Vegas, you’ll drive right by the Hoover Dam on your trip.

I headed out of Vegas around 7 am filled with anticipation and arrived at Grand Canyon West a couple hours later. After paying the park admission fee and taking a short shuttle bus ride, I finally laid eyes on the Grand Canyon.

I couldn’t really grasp what I was seeing…massive, sprawling, and absolutely breathtaking. It was hard to wrap my mind around a place so unlike anything I had ever seen before. The passing of millions upon millions of years was evident before me and etched into the canyon walls. I feel very fortunate to have seen some amazing sights in my life, but this was overwhelming – spiritual.

I was also surprised by the lack of safety features around the view points. There was nothing. My hands are sweating right now thinking about how I could walk right up the edge and one step further would be the end.

I do okay with heights but this danger certainly had my undivided attention.

I had an amazing afternoon at Grand Canyon West. Buying your admission ticket online will save time. There are many tour bus options out of Vegas but a rental car will allow you travel at your own pace. Traveling in a V-8 Dodge Challenger added to the day’s excitement for me.

The park uses shuttle buses to get you from point to point. There are three stops on the route with the second and third stops being Grand Canyon view points. The third stop was my favorite because it had more views and a small peak you could hike up and truly feel on top of the world. The much touted “Skywalk” is at stop #2. There is an additional fee for the Skywalk and you aren’t allowed to take photos. Instead, they have photographers that will take photos of you and sell them to you. Not a big fan of that setup and didn’t participate.

If you are in Las Vegas and want to get out of the city for a day, Grand Canyon West is a great excursion. You will drive right past the Hoover Dam so be sure to stop and check it out as well.